So the dealer meetings are over. I came into this NAB with a gut feeling that this show would indicate a turning point for the industry. The feeling i get from the manufacturers and their owners is the same.

WHAT DO I HOPE TO ACHIEVE THIS WEEK

What I am looking for this NAB as a vendor are just a few new manufacturers that are not commodities. It seems that over the past number of years a whole host of manufacturers have moved their channel to distribution leveling the playing field, yet also watering down value and incentive for the vendor. A more democratized marketplace is seemingly good. It does, however require us to re-evaluate our value proposition to our clients. This is an uncomfortable yet necessary evolution for any business.

When COMMAND Corporation was founded we were what is known as a "direct selling factory rep". That just means we carried a few manufacturers that needed deep, not wide penetration into the market. We provided them with our somewhat exclusive time and energy, and they in turn rewarded us with their somewhat exclusive protection. This model is actually a very good one for COMMAND Corporation and we maintain it to this day with what we call our top 5 or top 10 lists. All of that said, we are in the process of refreshing that aspect of our business just a touch to make sure we are offering pertinent solutions.

WHAT ARE MY PRE-SHOW IMPRESSIONS?

Things that caught my eye before the show:

Regarding the Ross link above. This from Ross is actually very interesting because they might be considered late to the game with this product, but yet their approach as a real switcher under the hood might also be the best way to go. Dr. Andrew Cross from Newtek said in two keynote speeches that PC’s are not getting any faster for two reasons, one is we saturate the capability of a system and so the perceived speed is never improved, "Moore's Law Has Failed Us", and also the chip manufacturers are focusing on smart device components and not PC parts, meaning a slow death or at least decrescendo in that market. This is why computer based switchers or software switchers can really only handle 4x 1080P or 8x 1080I sources max. They are moving away, seemingly from a “PC” approach under their hood as well. They are to announce something big in 30 days. They too might be working on an approach for an integrated production system with a real switcher under the hood. If so, it will likely be built by another manufacturer or in partnership with them I would guess.

Regarding IP, Newtek actually has an interesting philosophy and approach with their NDI standard. I think it may just eat away at the big guys and provide customers with an achievable path and probably more functional path to IP for Video. To be clear IP as we know it is not really what we are talking about here. Encoded video has been around a long time. What we speak of is the migration away from baseband video in an environment toward IP as your actual video infrastructure.

SMPTE 2022, SMPTE 2110 (AIMS) and ASPEN just seem like a way to replace coax and BNC's, they are not providing much more function. I am a bit skeptical. As I understand it, it is encapsulated SDI, and not much more. Several high end manufacturers mention that there are very few customers adopting either of these standards and it only tends to make sense right now if you have a very large routing requirement. On top of that, they are really expensive to deploy and therefore why in the world would you go that route? For most people AIMS and ASPEN do not offer any benefit right now. I think Dr. Andrew Cross is on to something with NDI. Let's hope they can keep the realiability up. For the record we have been involved in SMPTE 2022 projects, so we do realize that there is merit to that standard for certain clients.

I will gen up more thoughts later on this week. 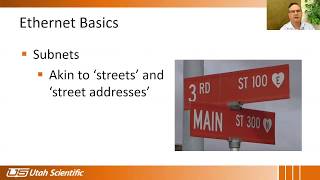